A Davidson County jury has returned guilty verdicts in the child rape and abuse trial of a former Hermitage babysitter. Jurors heard three days of testimony in the case led by Assistant District Attorneys Alyssa Hennig and Pam Anderson. Following less than two hours of deliberation on Thursday, Becky Burlison, 42, was found guilty on two counts of Aggravated Rape of a Child and one count each of Aggravated Child Abuse and Aggravated Child Neglect.

Burlison was arrested by Metro Nashville Police in April, 2012 after the two-year-old boy she had been babysitting suffered severe injuries when Burlison inserted a brush handle into the child’s rectum. The handle broke and became lodged inside the little boy’s body.

Assistant D.A. Alyssa Henning said the babysitter had been a trusted family friend. “The family is pleased with the jury’s verdict and understand that while this doesn’t change what happened to their son it does prevent her from hurting anyone else’s child,” General Hennig said.
Assistant D.A. Pam Anderson said the case demonstrates the commitment by the District Attorney’s Office to protect vulnerable victims. “We will not tolerate this type of behavior from anyone toward children in our community,” General Anderson said.

Becky Burlison faces a minimum forty-years in prison when she is sentenced on July 10.

“The ultimate form of depravity is when a person turns a little girl into a sex slave,” District Attorney Glenn Funk said in announcing the formation of a human trafficking unit inside the DA’s Office. Four Assistant District Attorneys have been assigned to the unit and will ensure full prosecution of human sex trafficking cases in Nashville. The move comes as the TBI creates the Middle Tennessee Human Trafficking Task Force to bring greater attention to the issue. The task force, which will include the DA’s Office, End Slavery Tennessee and several local law enforcement agencies, is currently working to secure a federal grant to assist in prosecution of offenders and services for victims.

The Davidson County District Attorney’s office confiscated a handgun from a convicted abuser, one of the first cases of its kind, the department said Wednesday.

Numbers released this week show more than half of all crimes in Tennessee are related to domestic violence. 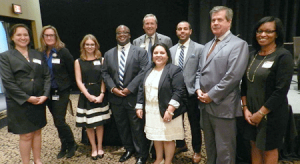 The DA’s Office is honored to receive the 2015 Leadership Award for Diversity from the Nashville Bar Association (NBA). District Attorney Funk accepted the award during the NBA’s Annual Law Day luncheon on May 1, 2015. The award was given to the DA’s Office in recognition of its contributions to enhance diversity and professional success. District Attorney Funk has made diversity a priority by appointing more African-American and Latino lawyers and executive staff to key positions in his administration. 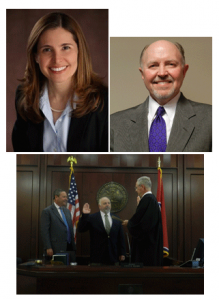 Robert Jones is a veteran trial attorney and previously served as Shelby County’s Chief Public Defender. Attorney Jones has more than 35 years legal experience and is a graduate of Memphis State University School of Law. As an Assistant District Attorney in Nashville, he will oversee prosecution of child abuse cases.

Attorney Leticia Mason’s private practice specialized in immigration and civil law. She joins the District Attorney’s Office after having worked as a Spanish court interpreter for Davidson County Criminal Court and a staff attorney for the Mexican government. She is a graduate of Nashville School of Law.

Investigator Randy Martin retired from the Metro Nashville Police Department in 2014 after 30 years as a police detective. He joins the DA’s Investigations Unit to assist in preparing cases for prosecution.
“I am pleased to have this group of professionals join our office,” District Attorney Funk said. “Their combination of experience and commitment to public safety will ensure our office continues to focus on protecting vulnerable victims.” 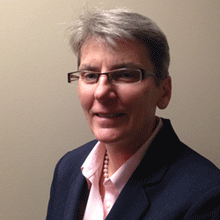 In the past, the law allowed school districts to have a policy that required all teachers to report cases of suspected child abuse or neglect to a designated person within the school and then that person would make the report to the CPS hotline. The current law (Tenn. Code Ann. §37-1-403) requires that the individual who suspects abuse must make the report. Schools are still allowed to develop a policy or protocol to track such reports, but they must allow the actual person who suspects the abuse to report that abuse.

Judge Randall Wyatt has sentenced a former TSA agent to six months in jail for secretly videotaping a co-worker inside an airport restroom. Daniel Boykin, 33, was ordered to serve six-months in jail and five-and-a-half years on community corrections after pleading guilty to unlawful photography, aggravated burglary and violation of the computer act. Assistant District Attorney Amy Hunter, who called the case one of the most invasive and offensive crimes she’s prosecuted, said she is pleased with the judge’s ruling.

After an office review uncovered child abuse cases that had not been acted upon over a several year period, District Attorney Glenn Funk has appointed a team of prosecutors to determine whether the cases can still move forward. The initial discovery of more than 70 unresolved child sex abuse cases, some dating back to 2010, was made in January. A further review in March, revealed 60 additional child physical abuse cases that had not been acted upon, some of which were more than 10 years old. “The concern here is that a child might have been left in a dangerous situation or that an abuser has abused again.” Funk said. “The primary mission of the District Attorney’s Office is to protect Nashville’s most vulnerable victims. Children are among the most vulnerable.” Funk has appointed the following team to work specifically on resolving these cases:

During January’s Vanderbilt rape trial, the spotlight was not only on the defendants but also the legal teams trying the case.

Among them was one woman, Assistant District Attorney Jan Norman, who became a prosecutor after discovering her career in sales wasn’t her true passion. Norman shared her thoughts with News 2 on the high-profile case that gained national attention.
“I did have random people come up and say they saw me on TV,” she recalled. But for Norman, her focus was not on the cameras; it was on the jury and victim whose statement the she read with emotion at the end of the trial.
“As I was reading it, I was thinking of her and her speaking those words which made it that much more meaningful to me,” Norman explained.

Norman, a Brentwood native who graduated from Belmont University with a marketing degree, said after working a few years in sales she felt unfulfilled and decided to make a career change.“I think going late in life and having some work experience and life experience definitely helped,” she said. While in law school, Norman interned with the Davidson County DA’s office.
“I knew 100 percent this is what I wanted to do,” she said. Since the end of the Vanderbilt trial, Norman said rape victims have reached out to her. “I get phone calls from rape victims, letters saying they were encouraged and inspired by it,” Norman said. Norman also said her position is her dream job, and she has no plans of leaving it anytime soon.

The Tennessee Titans recently teamed up with the Nashville District Attorney’s Office to help educate students about the dangers of domestic violence through the promotion of healthy relationships. The Healthy Relationship seminar was presented to over 700 students grades 7-10 at Martin Luther King Jr. Magnet School in Nashville. “We really want to thank the Tennessee Titans and the District Attorney’s Office for coming to M.L.K. today and appreciate the honesty in showing our students what healthy relationships are,” said Dr. Angela Carr, executive principal at M.L.K Magnet School.

Domestic violence issues make up more than half of the violent crime in the Middle Tennessee region. Titans safety Michael Griffin, center Gabe Ikard and guard Justin McCray were on hand as guest speakers at the event, which included a highly interactive look at how the consequences of the choices we make can impact our lives forever.
“Change comes through educating young people about the choices they make, the penalties associated with crime and the impact on families.” District Attorney Glenn Funk said.

The District Attorney’s Office informed students about the legal ramifications of their actions and also discussed the resources available to help support victims of domestic violence. The event also included a question and answer session which allowed students the opportunity to ask questions regarding healthy relationships. “We definitely want to make sure that our students are equipped with learning what healthy relationships are and applying what they have learned in their lives,” Carr added. One of the many highlights of the program involved Titans players presenting their personal testimonies to the group and how they have properly handled certain situations they’ve experienced. “We are grateful for the Tennessee Titans’ dedication to this issue and for their commitment to help make Nashville a safer and healthier community,” added Funk.

January 29, 2015 – Statement of Support ‎from a Survivor of Rape

In response to the verdicts issued, the victim makes the following statement:
Thank you to everyone who has supported me throughout this difficult process.

I am thankful that the criminal justice system will hold the defendants responsible for their violent crimes. The hard work of the law enforcement officers, prosecutors, and victims’ advocates who dedicated so many months of their lives to this case has made justice possible.

I want to especially thank Detective Jason Mayo, Sergeant Mike Shreeve, Detective Chad Gish, Deputy District Attorney Tom Thurman, Assistant District Attorneys Jan Norman and Roger Moore, and Victims’ Advocates Wanda Swan, Lieutenant Rochelle Barrios, and Teresa Shearon. You are my heroes, and I am so proud of and grateful for each of you.

I am also hopeful that the publicity this case has received will lead to a discussion of how we can end sexual violence on college campuses.

Finally, I want to remind other victims of sexual violence: You are not alone. You are not to blame.

October 22, 2014 – YWCA AND LAWYERS’ ASSOCIATION FOR WOMEN TEAM UP TO EDUCATE THE LEGAL COMMUNITY ON DOMESTIC VIOLENCE
View the official Press Release