With the beginning of a new year, Nashville/ Davidson County District Attorney General Glenn Funk sat down with News 2 to talk about fighting crime in 2023. 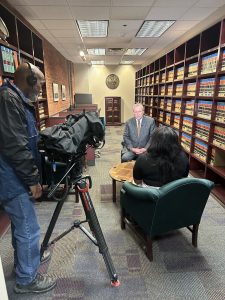 A big part of that fight is urging Nashvillians to be responsible gun owners.

Last year, MNPD reported a record number of guns stolen out of vehicles. The majority of them were taken from cars that were left unlocked.

“Part of the problem that we see is that a responsible gun owner does not leave their gun in their car,” said Funk. “If you have a gun in the car, it’s much more likely to get stolen. That’s how we’re seeing a lot of guns end up in the hands of juveniles, and somebody who’s not even 18 years old yet does not appreciate the sanctity of life or the permeance of death and that’s just a really bad mixture.”

The latest release from MNPD revealed 1,353 guns had been stolen from vehicles in Nashville in 2022. More than 70% of them were taken from vehicles. Police also note that vehicle burglaries go “hand-in-hand” with vehicle theft.

“I’m really trying to work hard to get the message out and so is the chief to be safe when it comes to how you store your weapons,” Funk said.

Metro Police Chief John Drake and his officers have been advocating responsible gun ownership for months.  General Funk is optimistic that the partnership between Metro Police and the DA’s office, along with a renewed awareness about safe gun ownership, will lead to fewer gun crimes in the new year.