Special Thanks to all who came out for the Donelson-Hermitage and Goodlettsville Christmas Parades on December 4th.  District Attorney Glenn Funk and several staff members had the privilege of walking in the Donelson-Hermitage parade at 2pm, followed by the Goodlettsville parade at 4pm.   General Funk was honored with ‘The Spirit of Christmas’ award at the Donelson-Hermitage parade for his ‘Christmas Vacation’ themed  wood-grain, antique station wagon with a lighted tree on top.  Melissa Jared, whose late husband Steve helped organize the Donelson-Hermitage parade for the past 3 decades gave the award to General Funk, stating that ‘Christmas Vacation’ (starring Chevy Chase as Clark Griswold driving an old wood-grained wagon) was her late husband’s favorite holiday movie.   Steve Jared passed away earlier this year, so the award was a true honor in memory of a great community leader.   Thank you sincerely to all who came out and attended both of these wonderful holiday parades! 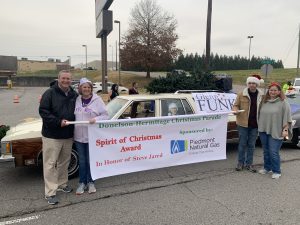