Travis Reinking, who killed four people in 2018 when he opened fire with an assault-style rifle at a Waffle House in Tennessee, was sentenced Saturday, February 5th, 2022 to life in prison without parole.  Reinking, 33, was found guilty the day before of all 16 counts, including eight first-degree murder charges.

District Attorney General Glenn Funk, and his team, have been preparing for the trial of Reinking for years. “This was a long process,” Funk said. “There’s a frustration anytime that a case takes four years to get to trial especially one that has this many causalities.” Frustration fueled the prosecution who poured over evidence despite disruptions and delays.  “Mr. Reinking changed lawyers. He had to have mental health evaluations. Then we’re almost ready for trial and COVID rolls in,” recalled Funk.

The 10-day-long trial focused less on if Reinking pulled the trigger, as he was seen on surveillance camera doing so, but instead, his mental state. “This was one of the rare cases that when the report came back, at first, the words that were used made it appear that they were saying that Travis Reinking could not understand the wrongfulness of his act,” said Funk. “Which is why we study these reports and don’t just look at what does the headline say.” In doing so, Funk said the finding revealed multiple layers of planning. “In 2017 [Reinking] had said he wanted to commit a mass shooting and that when he did the shooting he was planning to make people think he was insane at the time. Before he drove to the Waffle House, he had packed an escape bag that not only included a gun and more ammunition but also included some silver bars that he would be able to exchange for cash on the road so he wouldn’t have a trace of a credit card. After he got done, he went home. He took a shower. He changed clothes. He rearmed himself and he went and hid and tried to get out of the area,” Funk explained. “He clearly knew the wrongfulness of this mass murder.”   The jury heard from relatives of the four people who were killed. The four victims were all under 30 years old. 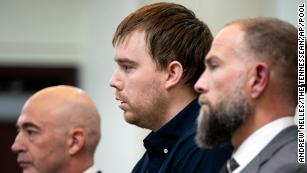 The two fatally shot outside the restaurant in Antioch, southeast of downtown Nashville, were Waffle House employee Taurean C. Sanderlin, 29, and customer Joe R. Perez, 20.  Inside, the gunman killed two more people: 23-year-old Akilah DaSilva, a student pursuing a musical engineering career, and 21-year-old DeEbony Groves, a college senior majoring in social work who had been out with her sorority sisters that night.
Funk also applauded the victims, and their families, for facing the gunman who changed their lives forever.  ‘They all had courage. They had strength. They had perseverance. They had character,” Funk said.
The Nashville District Attorney says the guilty verdict is a message to all of Nashville.  “We want to make sure that anybody who thinks that they can have a weapon, shoot someone else, get away with it because either the prosecutor’s office isn’t going to be focused on violent crime or because they think it will be excused by some mental health condition that they may or may not have,” Funk assured. “This behavior will not be tolerated.”